Written by Rachel Thompson on August 16, 2022. Posted in Blog. Leave a Comment

To protect yourself, be wary of answering phone calls from numbers you do not recognize. Never give out your personal information over the phone to individuals you do not know. Please contact our office should you have any questions or concerns.

Exceptions: Blanket waivers are available for applicants who are too young to receive the vaccine, have a medical contraindication to the vaccine, or who do not have access to one of the approved COVID-19 vaccines in their countries. In addition, individuals may apply for an individual waiver based on religious or moral convictions with USCIS.

Congratulations to Poarch Thompson Law attorney Rachel Thompson who was recently confirmed as President of the Salem/Roanoke County Bar Association for the 2021-2022 year. Rachel Thompson along with the Roanoke Bar Association (Dan Frankl) and Virginia Women Attorneys Association (Sue Cook) presented Judge Cullen with his robe and honored his appointment as Judge of the United States District Court for the Western District of Virginia.

This week, Secretary of Homeland Security Alejandro N. Mayorkas directed U.S. Immigration and Customs Enforcement (ICE) and U.S. Customs and Border Protection (CBP) to place new limits on civil immigration enforcement actions in or near courthouses. A civil immigration enforcement action may be taken in or near a courthouse only in certain limited instances, including the following: (1) it involves a national security matter, (2) there is an imminent risk of death, violence, or physical harm to any person,  (3) it involves hot pursuit of an individual who poses a threat to public safety, or (4) there is an imminent risk of destruction of evidence material to a criminal case. This policy supersedes an ICE Directive issued in 2018 and marks the first time CBP has ever had formal policy guidance regarding civil immigration enforcement in or near courthouses.

“Ensuring that individuals have access to the courts advances the fair administration of justice, promotes safety for crime victims, and helps to guarantee equal protection under the law,” said Secretary Mayorkas. “The expansion of civil immigration arrests at courthouses during the prior administration had a chilling effect on individuals’ willingness to come to court or work cooperatively with law enforcement. Today’s guidance is the latest step in our efforts to focus our civil immigration enforcement resources on threats to homeland security and public safety.”

How has President Biden changed immigration?

How has President Biden changed immigration? I’ve been asked that question dozens of times by family and friends. Immigration has been such a hot topic during the 2016 and 2020 elections and many individuals are curious about what has changed between the previous administration and the current one. The reality is that most of the significant changes that affect an immigration attorney’s day-to-day practice cannot be explained in an elevator speech or bullet list. This is not specific to the most recent administration change, but every time there is a change of presidency. I’ve now practiced under three different administrations and each new presidency brings with it a sea of change, and President Biden’s short time in office has proven to be no exception.

Some quantifiable changes under the Biden administration (and the answer to the question I believe most people are looking for) include the following:

To read the full article, please continue on the Roanoke Bar Association website.

On Tuesday, March 9, 2021, the Department of Homeland Security (DHS) designated Venezuela for Temporary Protected Status (TPS) for 18 months, from March 9, 2021 through September 9, 2022. The reason for this designation is due to the severe political and economic crisis in Venezuela that temporarily prevents nationals from returning safely, including a complex humanitarian crisis that includes widespread hunger and malnutrition, an increasing presence of non-state armed groups, and a deteriorating infrastructure. This designation will permit eligible Venezuelans to file for TPS status and for related employment authorization documents (EADs) and advance parole (travel permission). In order to be eligible for TPS, Venezelans must be able to demonstrate continuous residence in the United States since March 9, 2021. Applicants must apply for TPS within the 180-day registration period from March 9, 2021 through September 5, 2021.

Additionally, DHS provided important information regarding Deferred Enforced Departure (DED). Pursuant to a Presidential Memorandum in January 2021, certain Venezuelans nationals who were present in the United States on January 20, 2021 and have been continuously present, may benefit for a period of 18 months from DED. The Federal Registrar notice provides details regarding how to apply for work authorization under the DED program.

Finally, DHS suggests that those covered under DED should also apply for TPS in order to preserve the option of TPS in the event that the applicant is ineligible for TPS late initial filing and in case DED for Venezuela later expires.

The information in this blog is for informational purposes only. If you have any questions, please contact our office for professional legal advice.

USCIS also states in the notice that it will “take appropriate steps to provide evidence of the one-year extensions of deferred action and employment authorization documents under DACA to individuals who were issued documentation on or after July 28, 2020, with a one-year validity period under the defunct policy.”

Immigrants who are convicted of the following crimes will be barred from receiving asylum: any federal or state felony, alien smuggling, illegal reentry, gang activity, DUIs, drug crimes, domestic violence and offenses relating to false identification. The rule also bars immigrants who were merely charged in domestic violence offenses even if no conviction was made. If an immigrant’s criminal history falls into one of those categories, the immigrant is no longer eligible for asylum. They remain eligible for withholding of removal, a much higher burden and a much harder case.

Most individual commenters and all organizations, including non-government organizations, legal advocacy groups, non-profit organizations, religious organizations, congressional committees, and groups of members of Congress, opposed this rule. This rule has already been challenged in federal court, specifically in the Northern District of California. In time, other challenges may also be filed in other federal courts. However, as of now, this rule goes into effect on November 20, 2020.

Come learn about the 10 steps to naturalization at the next USCIS Lunch & Learn! Attorney Rachel Thompson will introduce her mother, Joy Hepkins, who will talk about her immigration journey to U.S. citizenship at this informative USCIS Washington District Office Lunch and Learn on webex: Let’s Celebrate Citizenship, Friday, September 18, 2020, 12pm–1pm, sponsored by US Citizenship and Immigration Services and the City of Roanoke and organized in part by PTL’s community partner, El Puente Legal Services (BIA Accredited Representatives). 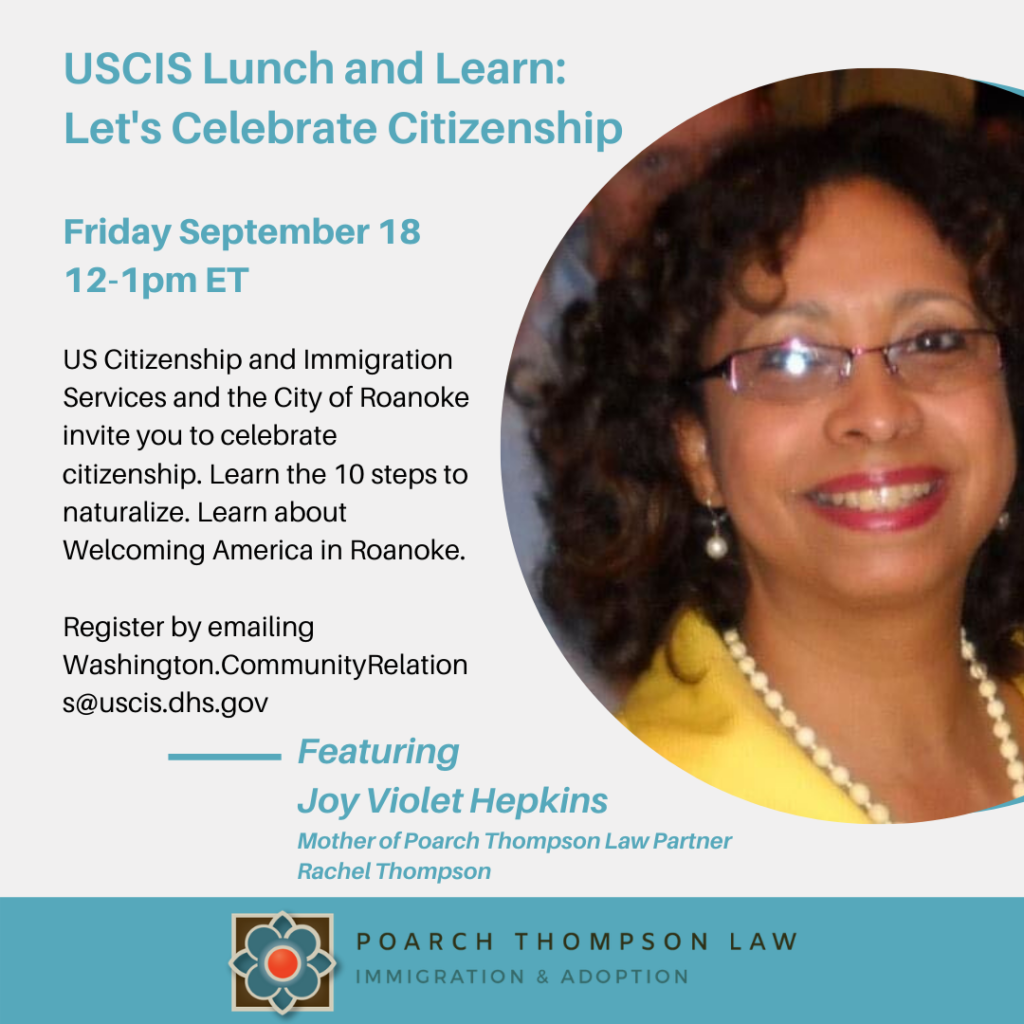 For information on registering to attend the event and webex details, open the flyer attached below:

Poarch Thompson Law attorney Jaime McGuire has been recognized by the Federal Bar Association Immigration Law Section with the Younger Lawyer of the Year award.

Jaime is on the FBA-ILS Younger Lawyers Division committee and has done outstanding work organizing informative webinars for the section. 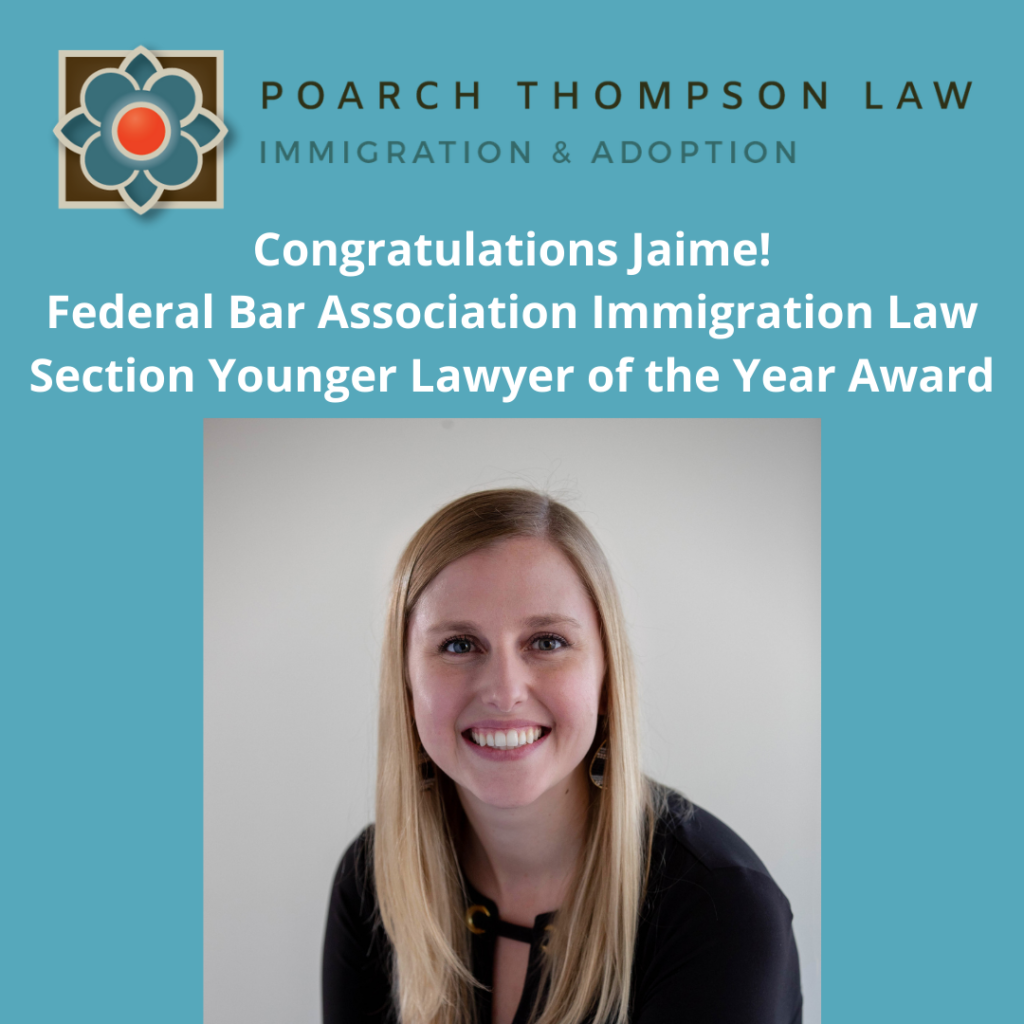 Want to stay up to date on the latest Poarch Thompson News?

The results of client matters depend on a variety of factors unique to each matter. Past successes do not predict or guarantee future successes.
View Disclaimer